After a long pause from blogging (filled with research work, of course!) and (temporarily) switching to english, a lot of interesting material is waiting to be published. Here on the blog, I’d like to share my impressions from TU Dresden’s International Summer School on „Digitization and its Impact on Society“ (September 29-October 5) and announce my next presentation at the World Social Science Forum in Montréal, Canada (October 13-15).

The Digitization Summer School finished about one week ago with a keynote and panel discussion on Science 2.0 and the Knowledge Society. With a focus on what digitization means for today’s researchers, this was a very good round-up of the days before when participants from various disciplines (mostly social sciences) shared their views and insights about how digitization influences society, and many discussed what role scientific research can play in observing and analyzing the processes of digitization.

Although unfortunately I was able to attend only some of the sessions, I was greatly impressed by the diversity of views on digitization and the fruitfulness of the debate. With a nice mix of formal debate after the presentations and informal debate in-between and in the refectorium, supported by nice (though not warm) wheather, it was easy to get from specific issues like the voting mechanisms of liquid democracy to more general themes like the role of interactive feedback in online communication.

The participants were highly interested and debating lively until the very end of the summer school and we had a very nice workshop on the role of formal and informal learning in context of 21st century higher education. With regard to my presentation of research findings about the digitization of academic practices, there was an interesting gap between the level of adoption of new media among the Saxon researchers in the humanities and social sciences that I have been investigating and the participants‘ use of social media – whereas the first group is still in a phase of early adoption, the latter were so seemlessly switching between face-to-face and online communication that the notion of „digital natives“ seems to make much sense here. We had much fun following the back channels on twitter and etherpads and the organizers‘ are doing a very good job with the weblog accompanying the event. I hope much of the debate can go on in the next time and the connections between the participants will last!

For me, the next event is closely related with regard to the topic, though not geographically. I’m travelling to Montréal, Canada, to join the World Social Science Forum 2013 (#WSSFMontreal, 13-15 October), an interdisciplinary meeting of social scientists from all over the world organized by the International Social Science Council. The theme of the congress is „Social Transformations and the Digital Age“ with a special focus on the impacts of new technologies on the practice of social sciences – an ideal match with my research interests! I’m looking forward to meeting old colleagues and new faces, getting to know about current research frontiers and get feedback on my own research that I’m presenting on Sunday, 15:00-16:45 in a session on „Methological Innovation„. My paper has the title „From Potential to Practices: A Qualitative Study of Scholars‘ Adoption of Digital Technologies in Political Science and two Humanities Disciplines“ and will present new results from the analysis of my qualitative interviews with researchers in political science. 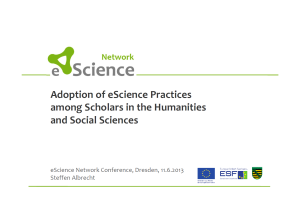 Looking forward to next week’s Sunbelt Social Networks conference of the International Network for Social Network Analysis (INSNA) in Hamburg. I’ll be giving a presentation on „Scholars‘ Adoption of Escience Practices“ (session „Mixed Methods Network Studies 2“, Friday afternoon, 24th May, 13:30 – 15:30) with some early results from my interviews, focusing on the influence of social network ties on the adoption of e-science practices in the humanities. I look forward to meet old and new colleagues and also to meet with old friends in Hamburg – as the conference takes place at the university, it will feel like coming home after several years at other universities, I guess.

Update: The slides for my presentation entitled „Scholars‘ Adoption of E-Science Practices – (Preliminary) results from a qualitative study of network and other influencing factors“ are online!

(please note that the picture on slide 3 was different in the original presentation, but both show examples of confessions of offline scientists)